EXTEND TO THE GRAND OWL TRAIL

“We’ve been credit crunched before! We were born in 1933 to provide work in the great depression. We offered a beacon of hope in a period of great darkness”

“In 2000 our family grew as we welcomed the Millennium Owls. Now we are four, looking down from our lofty perches across Leeds as always in a rush to get to the future!

“Shiny polished white and bright Portland stone, gilded we are not. We were positively radiant in the dirty Leeds of 1933. With best seats in the house for Kings and Queens we’ve seen them all from George V to QE2!”

“This is no tradesman’s entrance, all the worthies pass beneath me! I spend my days trying to catch a glimpse of my reflection in the green tinted glass of the Rose Bowl building” 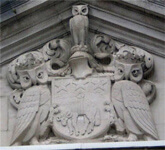 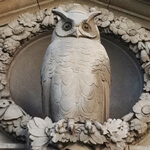 Here’s a sneak preview of the Civic Hall “Interior Owls” 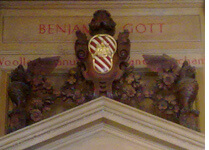 “Science and arts, that’s where we fitted in! So the Mechanics Institute appeared in 1865, the last great creation by Cuthbert Brodrick the city architect. Inspired by the Paris Opera House it is an elegant triumph in stone.”

“This fantastic building became the Leeds Civic Theatre and continued in that role until the new Millennium. Today it has a new sense of purpose as the new Leeds City Museum, an important cornerstone in the Millennium Square project.” 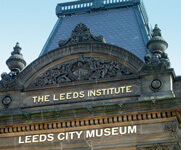 “You’re in the way of the traffic! The city fathers bleeted. So the old Cathedral was torn down and we were born on a new one at the side of the road. It was 1904 and here we are nestling on the gutters. A cosy bunch!”

“ Almost forgotten and covered in grime, we were sandblasted clean and back to our prime. But what has happened around us? No longer the dirt and decay of old Leeds. Everything is now bright and jolly, a new millennium has dawned. Lets Love it and Live it.” 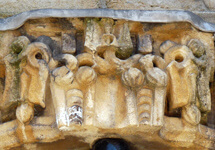 “Our life began in City Square and we then moved to our own enclosure surrounded by bastions of culture. Gallantly we four owls commemorate the souls lost in conflict while Henry Moore watches us.” 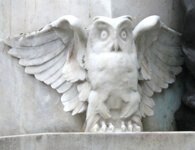 “If you think we look fabulous from outside, step in and check out the staircase of the Byzantine Romanesque tiles and paired dogs. We owls can’t take all the credit for this grandeur. See if you can find the owls in the entrance”

“Bayeux surely not! Well we were inspired by it and the great city of Leeds was founded on Textiles too! A riot of beauty stitched by hundreds of valiant volunteers, this is a national treasure. There’s even a whole parliament of owls in there too. Gaze in wonderment and get lost!”

The Leeds Tapestry is a magnificent collaged embroidery of 16 panels which tells the story of one city’s life through the artistic work of its people. Kate Russell pictured above at the relaunch of the Tapestry is the artist whose drive and passion has seen this remarkable contributory piece of work through. You can visit the Leeds Tapestry at Leeds Central Library (www.leedstapestry.org.uk). There are many owls featured in the tapestry so if you have the time please tell us how many you think there are (info@leedsowltrail.com).

“Cheeky beggars aren’t we all standing to attention. We’re on the loop now but what a journey we’ve had.”

“In 1876 we appeared crowning the railings of the fine municipal offices. This is no ordinary building. George Corson the architect wanted only the best.”

“Do you like our parade? It nearly wasn’t to be, those men at the war ministry wanted to melt us down. Rifles, that’s what we’d have become! Well, we survived and our home is now restored to a marvellous library which is much adored.” 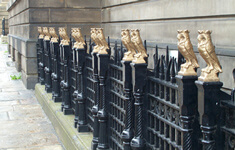 “Gosh this could be Milan! What a perch we inhabit! A George Corson rich Italianate palace dedicated as the new home for the Education Board. We sadly fell into disuse for many years before a big 1990`s wash and brush up brought a shine back to our feathers. Found us yet?”

The Old Leeds School Board built in 1878-81 is a grade 2 listed building. It was designed by the Architect George Corson. The board built schools so that every child in Leeds could go to school. The owls are high up in the round stone relief above the windows over the front door and a little difficult to spot!

“Fluttering skywards, sited all around, we were the highest owls in the world for a century on this most famous town hall in the Land. Opened in 1858 by Queen Victoria”.

Leeds Town Hall is a Grade 1 listed building. It was designed by Cuthbert Brodrick after a competition to build the Town Hall. Inside you will not only find an impressive 3-manual organ, the largest of its kind in Europe, built by Gray and Davidson but also an array of “Owls” built into the architecture and decoration. 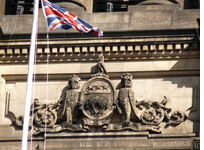 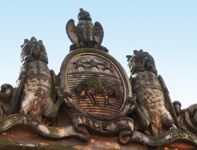 EXTEND TO THE GRAND OWL TRAIL

“Everybody loves art deco don’t they? We are silver, dashing and handsome, the original colour of the owls on the coat of arms guarding the 1930s Portland stone building with retro chic.”

“Wall Street of the North this was! All briefcases and bowler hats. The buildings were as grand as can be, like Venice without the sea! We arrived in 1900 and what a beauty we turned out to be so delight in our John Theulis frieze. Almost lost to the wrecking ball frenzy of the swinging sixties, today Park Row oozes culinary chic!”

18 Park Row was originally known as Abtech House and renamed Kenneth Hodgson House in 2013 following the tribute by Tim Hodgson in the memory to his late father. It was built by architects Oliver and Dodgshun in 1900. The front facade features a scene by sculptor Joseph Thewlis, commemorating international banking.
Park Row was the main ‘banking area’ in Leeds back in those days and this is a fabulous interpretation of the Coat of Arms raising the status of the owl to embrace the shield and sheep (textiles having been the staple trade of the town) perhaps as a mark of respect? This owl resembles the profile of the Yorkshire Penny Bank Owl.

2I was built to gaurd your pennies, alas I’m a bank no more. Formely the Yorkshire Penny Bank, just look up and enjoy! What a grand flamboyant extravaganza, buttresses and spires. Can you find me flapping my wings watching time pass by.”

“Nick Clegg and Paddy Ashdown well, I was their forerunner! I’ve been etched in the glass since the 1890’s. This was the original Leeds and County Liberal Club.”

“The Politicians are long gone but aren’t we swish? We rest now in a posh hotel. I stand proud in my canvas of glass. You see, we ‘re not just any old place, we’ve been voted one of the best in the world!” 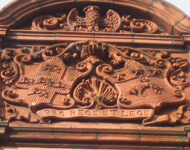 The Met Hotel, Leeds is a Grade 2 listed building located on King’s Street in Leeds. Built in 1898 as the Hotel Metropole it underwent a £6 million renovation in 2005 and then renamed to ‘The Met’.
The principal reason the Hotel Metropole is a listed building is the rare and remarkable Victorian terracotta facade. The cupula on the roof was taken from the demolishied 4th White Cloth Hall built in 1868 on the same site.

The Met tidied up the Owls which are located around the back especially to show off their wonderful connection with Leeds. Enjoy finding them. They are where the Green bins are! 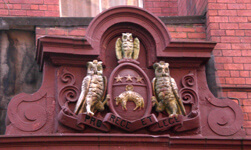 “We’ve been here since 1899 and what a grand view we have! Nothing escapes our attention in the beating heart of City Square. You’ll recognize us not square but round, delight in our rich green copper dome, eye up our balustrades and rejoice in our pillars!”

This was the original Midland Bank in Leeds. It has since been a pizzeria, Irish bar and now a Night club. 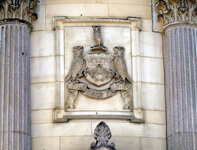 “Weather-beaten, rough and gritty! I was built from muck and brass. I nearly didn’t make it as the seventies wrecking ball was poised to take me away in a could of dust!”

“Born in 2013, I am the small king of things, born from heat, made to measure, a wisdom wink and a true city treasure. As the guardian at Trinity Leeds I am a tale told and a grin in your head forever.”

Weighing in at 72kg, cast in bronze and gilded in gold and palladium the Owl reflects the orginal colour of the owls on the Savile coat of arms whilst the gold represents the richness of the future and welcomes both citizens of Leeds and visitors to Trinity Leeds.

The Trinity Leeds Owl was created by Leeds based Artist Antonia Stowe and commissioned by Land Securities. 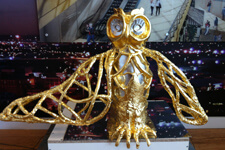 Have a look on the wonderful door of the Yorkshire Bank and you will find the owls.

“Guineas, shillings and pence! It’s all been under our watchful gaze. Dapper that’s us! We survived world wars and depressions to boot, looking out over Kirkgate has been a hoot!”

“Don’t ask! Everything is a penny. If you don’t believe us then ask Marks and Spencer!”

“Created by architects Leeming and Leeming in 1904, we survey a magnificent emporium of market trading. What a grand edifice we inhabit. We’ve survived great wars and terrible fires but here we are, in rich gold and green overlooking the current shopping scene.” 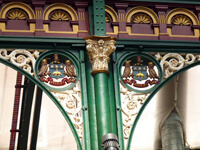 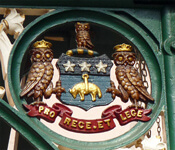 “Look at us! We’re not just any old owls! No, we inhabit Cuthbert Brodricks great masterpiece from 1860’s.”

“We also move with the times! We’ve had more makeovers than Madonna! Trading corn was our business, but times move on and a new career was called for. Shopping, that was our rebirth! Retro and stylish, arty and fashionable. Alas, like a chameleon we’ve changed again to tasty rich food and wine.” 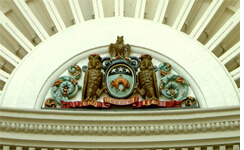 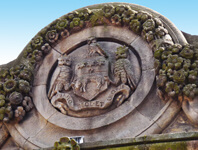 “Any more fares please! That’s why we’re here, to celebrate the great municipal pride in the Leeds City Tramways Department.”

“You see in 1915 this great building opened as a symbol of how important transport had become. We were cutting edge, here in Leeds, the first to use electricity from overhead lines to power our trams. A trendsetter, Leeds leads as they say!”

“Today we have a new use as a place to eat and a bed for the night. A boutique hotel no less.” 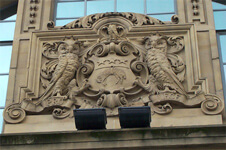 “Greta Garbo? Charlie Chaplain? No we were here first. Our home was the first to ever be caught on camera with moving film in 1888 by Louis le Prince. Top that Hollywood!”

“Traffic, Lots of it led to the creation of the new cast iron Leeds Bridge in 1873. You’ve passed us many times I’m sure in your bus or in your car but have you noticed us? We’ve seen it all from horse and carts to streamlined bendy buses. You can be sure that we’ve been looking at you!” 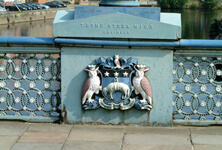 “Captured in glass above the door of the Leeds Civic Trust I rest patiently while these custodians of the city consider all that is great and good in Leeds. Formed in 1965 Leeds is what we and the Civic Trust are about.” 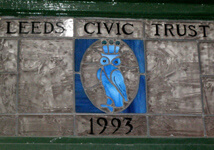 “Five churches on one site! The previous four fell victim to fire, war, plague and those Victorians! Free pews for the poor said Dr Hook. Let’s pull it down and put up something worthy of Leeds. So here we are, a rather fine pile don’t you think?” 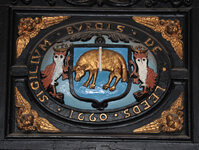