THE LOST OWLS OF LEEDS

Any Owls that used to be in Leeds City Centre on external buildings, paving or structures that have disappeared over the years can appear here. Where were they and where did they go?
Some owls have been awarded and we would love to know who has received owl awards and why?

We cite 5 lost owls below.

Please email us with your memories and any photos to info@leedsowltrail.com

The Theatre Royal, Leeds was built by Moore and Sons in 1876 on Albion Street and demolished in 1959 to make way for the shopping store “Schofields”. The site is now home to the “Core” shopping centre on the Headrow.

At the Theatre Royal, The Harry Hanson Court Players were the resident theatre company and the theatre had a long tradition of pantomine. The theatre was leased to Francis Laidler in 1909 and in 1957 he died leaving his wife to run the theatre. Unfortunately after 2 years she was forced to sell and the rest is shopping! To discover more please click here 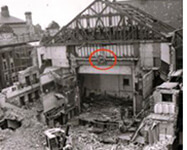 At the launch of the Leeds Owl Trail a gentleman told us all about the owls that used to be on Monk Bridge.

“I used to get the number 31 bus across the river and see the owls all in a row either side on the metal posts on the bridge. I think it was after the war when I noticed they had disappeared. They were lots of them at least 12″ in height and stood very proud indeed.”

So we found a photo on the internet and you can just make out the owls on the top of the ironwork. However if you didn’t know they were there you probably wouldn’t make them out from this photograph. 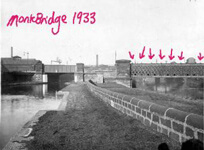 In Peter Mitchells book “MEMENTO MORI” on Quarry Hill Flats, on page 9 is a photo of a workman stood next to an owl from 1938.

We would like to know more about the owl/s at Quarry Hill. If anyone can provide us with any information and photographs we will be most grateful. We particularly like the art deco design! The flats were built in 1936 and demolished in 1978. They were the largest flats in Europe at that time.

The 3ft Owl that was once perched on the top of the Town Hall has spent considerable time lying on its back in a cell underneath the Town Hall next to an ice cream sign! The Leeds Owl Trail has negotiated the release and its sculptural form is now on display in the Town Hall. Obviously its spirit has been released to fly around the wild corridors of the Town Hall!

Does anyone have any further information about this owl? Where was it perched?

Lost Owls 5- Who has the owl

With sincere thanks to Kieran Preston OBE, Director General of METRO and Josie McHugh for sharing the story- 10th February 2012.

In the 1970’s Leeds City Council invited all Corporation departments to encourage employees to save with the TSB back. Leeds City Transport (bus) including departments of Cleansing, Highways and others took part in the scheme . An employee would agree an amount to be deducted from their wage which was paid weekly in cash. Applicants names and amounts were sent to the TSB and every 4 weeks a list that was probably handwritten, would be sent along to the bank with names and amounts deducted and a cheque. Passbooks were issued, but you had to go to the bank to collect it and updated when you went in to withdraw.

Leeds City Transport won the trophy as the ‘department’ collecting the most money over a period and the photo is above.

In 1974 Leeds City Transport became the PTE and I think the Leeds City Council scheme started to fizzle out although it may be the case of not taking on new savers.”

Thank you to Kieran Preston OBE for all his help and of course to Josie McHugh.
Who has the owl has yet to be discovered.

Someone out there knows something!
Please share with us at info@leedsowltrail.com 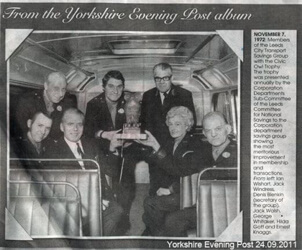